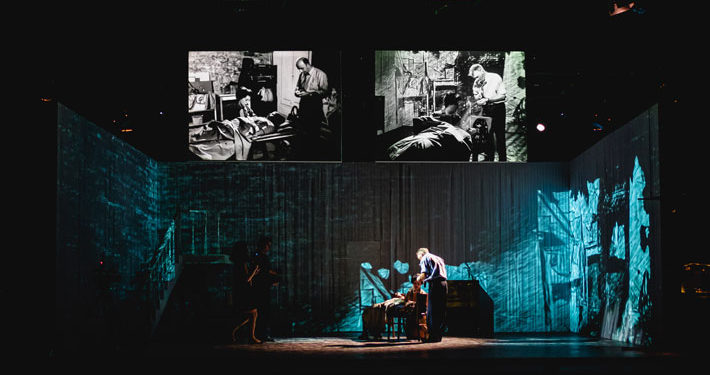 Being an avid zombie fan, I was genuinely intrigued to see how a group of actors could bring Night of the Living Dead to life on stage, with limited props and a few cameras – but the result was so much better than I could have expected.

Acting out the entire George A. Romero film, frame by frame, as a concept is complete genius, and the stage was set in white slatted drapes, on to which images and shapes were projected for scenery. One large screen above the front of the stage showed the original movie, whilst another large screen was capturing everything on stage, including the additional handheld cameras. This made the whole experience, including just watching what was happening on stage, completely three dimensional. Here was a definitive homage to the film, with the set, costumes and make-up all in authentic monochrome, adding to the whole ambience, and sucking you in.

The fateful and memorable opening scenes were quirkily redone by having cast members film a small diorama set up on a table in the middle of the stage, with a small toy car attached to a stick. It was both hilarious and brilliant, and certainly set the tone for what was to come for the remaining two hours. Romero’s original film was an apocalyptic vision of paranoia, but this labour of love was a softer, more humorous take on his vision. The acting was at times a little chaotic, with a lot of role sharing going on, and without time for costume changes but the screens distracted you from seeing too much of the stitching.

From the little cut out old TV screen shape dangled in front of a camera, to the raggedy old piece of garden hose which when chewed upon in black and white can look convincingly like a stretch of lower intestine, the DIY innovation and ambition on show was extraordinary. The cast played their parts superbly, especially the three main protagonists. The part of Barbara, played by Laura Atherton, who trained at Bretton Hall, was a mirror image of the scream queen kitsch portrayed in the Romero version, and there were even more stellar performances from Morgan Bailey, playing the unfortunate hero, Ben, and a blisteringly good turn from the comical Matt Prendergast, as Mr Cooper. Such a small cast, with limited props, really fleshed out their performances, making the whole more believable and satisfying.

Night of the Living Dead: Remix is bold and striking theatre, both incredibly complicated and remarkably simple. The biggest compliment I can pay it is to say I suspect Romero would be proud.

An Interview with John Illsley of Dire ...