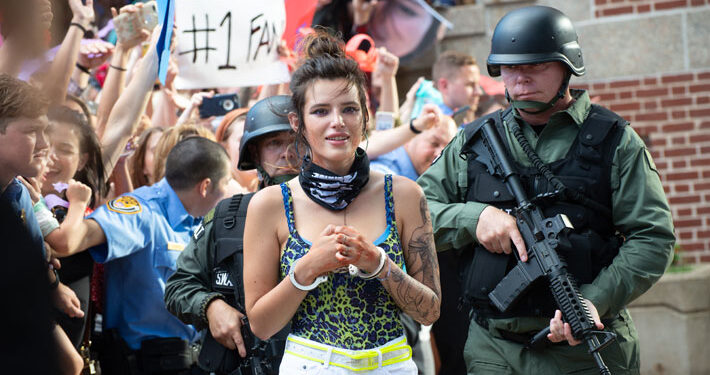 Arielle is a dope-smoking, whisky drinking kinda gal who is saving up a bunch of money because she wants to get out of nowheresville, Florida. She mingles with so-called friends who live on their phones and everyone does everything for the ’Gram. And every other line is “Like oh my gahhd.”

Dean is a moody James Dean kinda guy whose look and clothes have been art directed to within an inch of their life. He’s a mechanic who looks like Stephen Dorff’s kid, and was once involved in an armed robbery, which is like “soooo exciting?” Except not.

I’m 10 minutes into Infamous, and I’m annoyed. However, Bella Thorne and Jake Manley (could there BE a more macho name?) are natural screen presences, so I keep watching, because it’s lit like a pop video; she reminds me of Hustle’s Jamie Murray, and I start yearning for a script as witty as that show. Or as smart as Dexter, which Ms Murray also starred in, and was probably shot not far from this film. 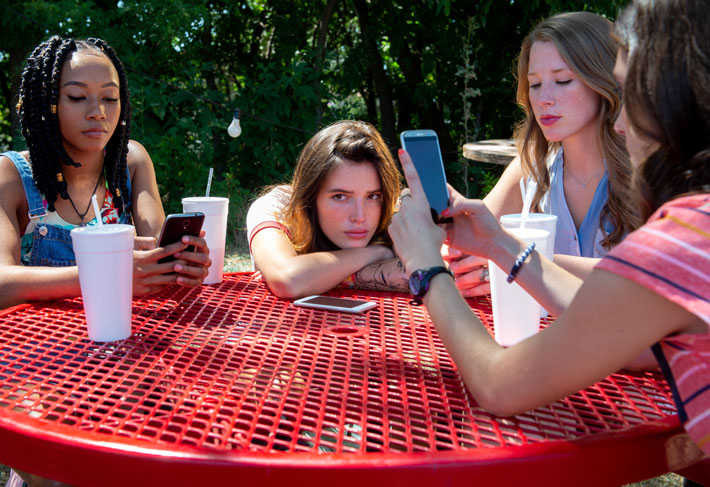 The plot is basically Badlands, Bonnie and Clyde and Natural Born Killers for the selfie generation. Is there a plot or is the cast going to spend half their time on phones while spouting generic dialogue?’ I wonder.

However, as is often the way with gloriously bad films, once my brain acclimatises to the awful script and generic characters, I relax and start to enjoy it.

When Arielle realises her hard earned money has been stolen from the box under her bed (it’s inevitable from the first minute we see said savings account), she launches into an all-out attack on her mum’s no-good boyfriend. Her ability to spout so many clichés is inspiring. It’s like she was “totally hoping to win an award for the year’s most annoying anti heroine”.

To give you an idea of how unhinged she is, when Arielle goes round her boyfriend’s house and finds him being beaten up by his guardian, the no-good father falls down stairs, appears to die, and she treats the tragedy like he’s stubbed his toe.

So the besotted young things go on the run in a classic convertible naturally, hold up a gas station, and she films it, because she’s that obsessed with being famous and social media. 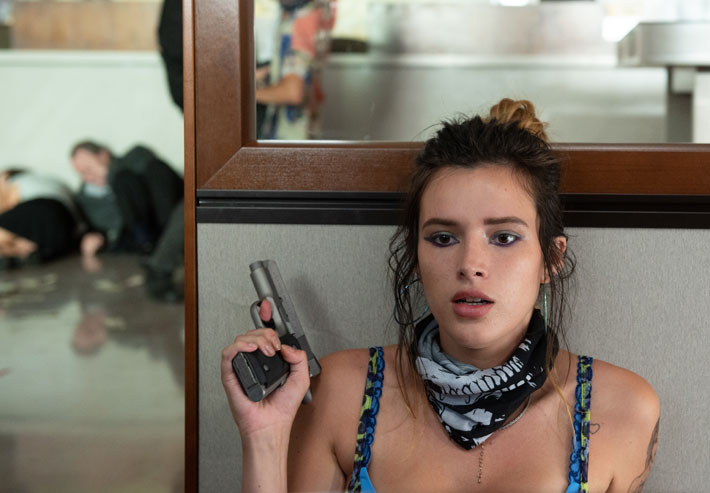 I would love to see Bella and Jake in a new Tarantino film, because they look amazing, but are sold so short by the script. Maybe in a remake of True Romance, which was no doubt a major influence.

In an age when every news report is more depressing than the last, trashy escapism like this is a tonic for those who want to flee to a neon-lit world of generic anti heroes. Yes it’s been done countless times before, but for the hashtag generation who spend more time swiping phone filters than watching decent movies, I guess you will totally have a good time.

Imagine if Michael Bay wanted to make a Transformers movie as barking as The Last Knight, but didn’t include any robots, then you get an idea of the tone. It’s fast, slick and strangely magnetic.

This was the number one film in America at some point recently. I’m guessing every one of Bella’s 23 million followers on Instagram either realised how meta the whole thing was, or just didn’t care. Either way she’s laughing all the way to the bank. Good on her.

How to Choose the Best Vinyl Flooring