An Interview with Composer/Conductor David Arnold 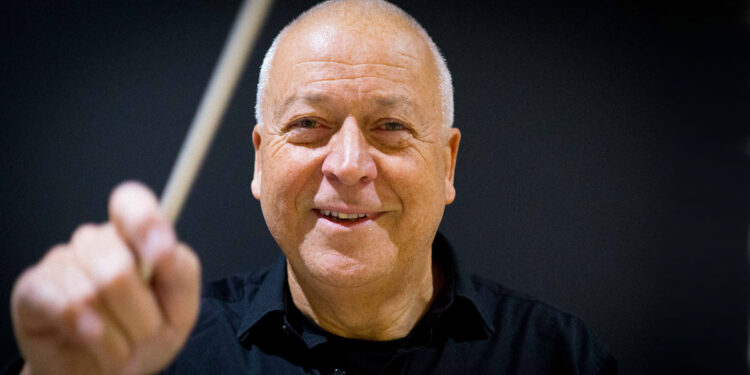 David Arnold has crafted some of the best loved music of the past few decades. Ahead of him conducting The Royal Philharmonic Orchestra in ‘The Music of Bond’ at Hull New Theatre, he discusses working on the music for Star Wars, one of the most acclaimed Bond songs, and answers that often unasked question: what does a conductor actually do?

Hi David. I’m looking forward to ‘The Music of Bond’ in June. What can we look forward to when you come to Hull?
Well I think what you would call a USP is that it’s not just all the James Bond songs. I mean you would expect us to be doing ‘From Russia with Love’ and ‘Writing’s on the Wall’, and ‘Skyfall‘, so there are the modern ones, with Sam Smith and Adele, and the Shirley Bassey belters as well which everybody loves. But the good thing about it is there is some fantastic background music within the films that nobody ever remembers. There is one in particular From Russia with Love; there is a really great scene that was never used as the title music but used within the body of the film. Also On Her Majesty’s Secret Service. The ski chase, there is a fantastic piece of music and nobody ever plays it. It was kind of buried in the film. And then the only time you ever hear it isn’t in the concert hall but in the film. But in Hull, you’re going to hear it in the concert hall. A lot of people will be wanting to see ‘Diamonds are Forever‘, and all the ones that everybody would know, but in concerts like this I think we always have to offer a tiny bit more than something that the average concert wouldn’t have. I’m really hoping that people are going to respond to that and say “I remember that in the film now. What a great piece of music!”. I’m hoping that’s the reaction.

I’m guessing you are a bit of a James Bond fan.
Absolutely. We are all James Bond, only in our minds. We all have the ‘Aston Martin’ and ‘All the girls coming out of the sea’, even if we were not allowed to be there.

And you’re no stranger to those classic title songs are you?
No. When I started out as a percussionist, and I was booked as a session musician… you’re booked for things; you don’t even know what you going to be playing. So you turn up at 10 o’clock. It could be a jingle; it could be a TV advert, a signature tune. It could be anything at all. For this particular one, Marvin Hamlisch was there, and it was the music to The Spy Who Loved Me! So I turned up with my timpani and xylophone and all the rest of it. They said, “We’ve got this bit of music, and it’s the first Bond film where the title song won’t be the name of the film. So the film is The Spy Who Loved Me, and the song is called ‘Nobody Does it Better’”. And they said: “We’ve got Carly Simon coming in this afternoon, and we’d like to just run through it; just the rhythm section to see if it’s any good”. So Marvin was playing the piano and we started ‘Nobody Does it Better’. All of us in the band knew that we would hear that song again. It’s a really funny thing, but somehow a good tune is just remembered… it’s always been there. I actually did the first run-through of ‘Nobody Does It Better’, so that’s very close to me. I think Carly Simon always knew it was good. We actually saw it with warts and all, then we recorded whole thing in three-hour units, and that was the backing track. It was done. It’s also got the best possible quote from all the James Bond films, and I know you’ve been watching them. The bit with Roger Moore and the one action with the eyebrow that goes up. His Commander says: “What are you doing Bond?” and he’s obviously in the pod in the middle of the ocean at the end. “I’m keeping the British end up sir”. Only Roger Moore can say that! (Laughs). 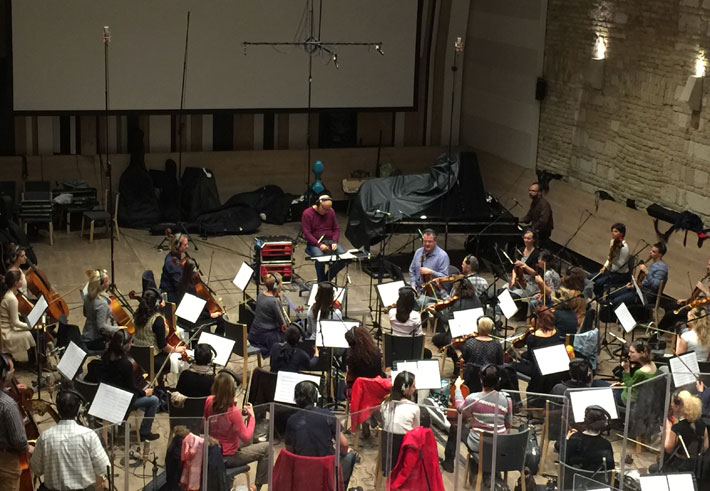 “We were facing the wrong way”

How did you get into the business?
Well I went to the Royal College of Music. When I was 21 I left college and joined initially the London Philharmonic Orchestra as a percussion player; I bypassed all the regional orchestras and there happened to be a vacancy. I played with the London Symphony Orchestra, and then after that I got promoted to a principal player in the Royal Philharmonic. If you listen to Star Wars, that’s me playing the cymbals. That would be at Abbey Road I think.

The original Star Wars score is one of my favourites. What are your memories?
It’s funny, when you record films like that you see the big film behind you. The conductor has to look at the film and conduct the orchestra at the same time. So we are busy concentrating on our music and we’ve got no idea what’s going on behind us, because obviously we were facing the wrong way. I’ve got a recording somewhere of the first run through of the theme from Star Wars and it’s a time signature that’s quite unusual because it’s in 2,2. (Hums the classic Star Wars theme at the right speed). But the orchestra mis-read it and thought it was 4 (a lot slower). It kind of ground to a halt (laughs).

You’ve also composed a wealth of TV and radio themes, from The Big Breakfast and Live and Kicking, to Classic FM. Does it take a lot of time to record something so short?
It’s kind of a lifetime’s job. Classic FM launched in 1992, so that same theme has been there nearly 30 years; it’s become part of the brand in the same way as Coronation Street. You don’t need to know who is in Coronation Street, but the tune is still there. And in 1983, I did all the station jingles for BBC Radio Humberside!

Is your work easier or harder now than 30 years ago?
In a way it’s trickier now, and a lot of it is to do with technology. In those days in the 80s or 90s you had to have a quarter of a million pound studio and orchestra. And nowadays all you need is a laptop. In one way technology has made it easier, but it’s also made composing a lot more competitive. You don’t need to have a degree for the Royal College of Music. You just need the software. And it’s kind of painting by numbers. I’m not denigrating the modern producers and composers. They come up with some fantastic stuff, but it’s a different type of composition. It’s technology rather than being cerebral. It’s seeing what works and pushing buttons until you get something that’s good. Whereas composers really would think of it in their imagination first, rather than being dictated by the technology.

This might sound like a stupid question, but what does a conductor actually do?
It’s like a football manager. The most important part is the preparation. So the musicians know what you’re expecting. At a concert like Hull, somebody will be at the mixing desk and they’re going to be controlling certain elements of it. Often as a conductor I’ll set the orchestra off and say, “I’m just going to go and listen to see what they’re doing” and leave them alone. Virtually every time, by the time it gets to the end of the piece they’re playing at half speed. It gets slower and slower unless you’ve got someone whipping them and really keeping on top of them all the time. They just respond to each other and it’s like treading in mud. Nobody is leading them. Also they won’t play in certain bits until you tell them. You can have them on a ‘fishing line’, and you can also get those poignant moments, so that’s what a conductor does. “One of the best songs there possibly ever was”

It must be a joy to get back out on the road.
I can barely wait. I’ve just been arranging things and writing things, so I’ve just kept going, but just imagine you’re a trombone player. What do you do all day? Well you can only practice the trombone for so many hours a day and you’re not going to get much better before you’re driven crackers (laughs). We’ll have three trombones up in Hull and I think they’re desperate to go.

Of course even bad Bond films produce great music.
Yes. There was a fantastic James Bond film, that wasn’t really a James Bond film. It was a spoof of Casino Royale, with Peter Sellers and David Niven. They thought everything would be formulaic and terrible, but they got Burt Bacharach and Hal David to do the score, and ‘The Look of Love’! So one of the songs they thought was gonna be a terrible p*ss take turned out to be one of the best songs. The lesson to be learned is if you want a crap song, don’t get Burt Bacharach to do it. We are doing that and no apologies for that. Again it’s not technically a James Bond film, but it’s much more than that. It turned out to be one of the best songs there possibly ever was.

Give us an insight into a musician’s personal take on a Bond piece.
When the orchestral parts are given to them, they often make comments on them and cross things out. We did a concert before lockdown, and we were doing ‘For Your Eyes Only‘, but one guy had crossed it out and put the Specsavers song: ‘Your Four Eyes Only’. (laughs).

Have you ever met the other composer David Arnold, who crafted four of the best 007 scores?
I met him at some sort of awards ceremony. A mutual friend of ours, a saxophone player said, “Actually I’ve got someone I think you should meet,” and he introduced us for the first time, so we had a picture taken with our fists raised at each other (laughs). That actually happens all the time. We just have the same name.

David Arnold conducts The Royal Philharmonic Orchestra – The Music of Bond on 12 June 2021, 7.30pm at Hull New Theatre, Part of The Prologue Series

All the Colours of You by James ...

The Song of Achilles by Madeline Miller ...