We could all do with a laugh right now, perhaps even a hug too. Fortunately, Patrick Monahan offers both in abundance.

‘It’s good to be back,’ the Irish-Iranian stand-up tells us as he steps out on stage at Junction Goole to rapturous applause.

Started From The Bottom, Now l’m Here, “‘Reflects on the past, growing up as an immigrant and coming to the UK. From living in a caravan during childhood, to today where I’m living next door to middle-class neighbours,’ says Monahan.

Though he’s had quite the wait to take the 2019 Edinburgh Fringe show on the road, the pandemic has given him plenty of new material to work with.

After warming us up with a few light-hearted gags, Monahan gets stuck into the first of two 45-minute sets.

‘Lockdown was tough, wasn’t it?’ he probes. ‘There were times when we were just hoping loved ones would go to hospital for a few weeks, right?’

Though the pandemic put a stop to live comedy, Monahan has a talent for entertaining and found new ways to share the laughs.

After using lockdown as a chance to reset, he took the opportunity to do things he’d always wanted to do, but never had the chance. Teaching himself how to film and edit sketches, he posted them on social media – much to the delight of his fans.

He goes on to tell us that he even did a set for a stag do via Zoom. ‘The gig was at 6pm and they’d all been drinking since 10am…’ he says, ‘you can imagine how that went!’

As he turns his attention to the crowd, I feel smug that Mum and I had opted for backrow seats as those at the front become prime targets for the affable comic. 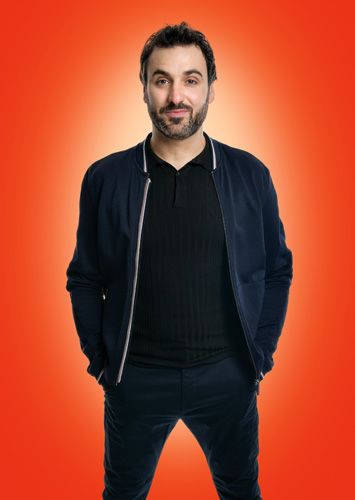 A natural-born performer, Monahan works the room with ease as he singles out a trio of female OAPs who give just as much banter back.

Asking whether there are any key workers in the house, he soon finds a few more audience members to engage with – including a police officer, nurse and an undertaker.

Monahan is highly skilled at working a room and going off-script. His smart and funny observations have the crowd in floods of laughter.

Surprisingly, the multi-award-winning stand-up got into comedy by pure chance. ‘I hadn’t a clue what live stand-up comedy was, or that it was even a career,’ he tells me later. ‘It was only when I was in my 20s and in London that I gave it a try. Walking into an open-mic night on my own, I didn’t know anyone so asked if I could have a go. Standing on a wooden pallet that was a stage.’

The affable comic has certainly come a long way from those wooden pallet days. An Edinburgh Fringe regular, he’s performed at cities nationwide and had numerous TV appearances – including Let’s Dance For Sport Relief and Splash! He even won Show Me The Funny back in 2011.

The heavy audience interaction in Started From The Bottom, Now l’m Here is what makes it brilliant. Unlike other stand-ups I’ve seen, Monahan draws upon his audience and surroundings for fresh inspiration, making for a unique evening of entertainment.

The second half of the show features some of Monahan’s personal experiences as he shares tales of his socially-conscious Iranian mum, his ever-scavenging Irish dad, and living in a caravan.

Material on dating and mix tapes closes the show, as Monahan drags up a few audience members for a dance to ‘Tragedy’ by Steps – followed by some saucy moves from the fellas, which brought belly laughs.

Catching up with Monahan after the gig, he tells me: ‘The pandemic showed us next time might not be for a long time, so take every opportunity you can now and enjoy the hell out of it!’

As for me? I certainly won’t take live comedy for granted ever again. Laughter is contagious and Monahan’s material is just the tonic to bring some cheer in these testing times.

A Q&A with Anfang

What is the Druids’ Temple in Masham?