The title of this autobiography provides a clue that this isn’t going to be a light-hearted look back at a happy childhood.

Alan Davies is a comedian, but the humour here is dark. He begins his story driving through the countryside as an adult trying to decide what to do with his father’s stash of pornographic photos of teenage boys.

He weaves the tale of what brings him to this point through the chapters which go back and forth in time.

From the word go, it feels that writing this book is a cathartic process for Davies, who revisits memories which clearly still bring him pain. 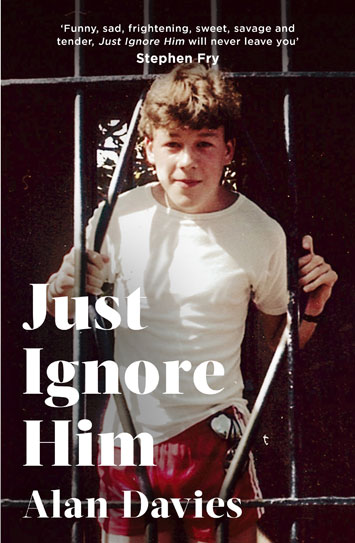 His life changed forever at the age of six when his mum died of leukaemia, a tragedy made all the worse because his dad kept her terminal condition secret from their children. Incredibly, he also wouldn’t allow his wife to be told she was dying, so she was unable to say a final goodbye to anyone.

After she died, photos of her were removed and Davies and his siblings weren’t able to grieve properly for their mum. Sometime after, he visited Davies in his bedroom and abused him.

This was the 1970s, long before Childline, and the young Davies had nobody to confide in. He has an older brother and a younger sister, but it appears their dad never abused them, and they were reluctant to acknowledge the thought that their only surviving parent was a child molester. Even when Davies confronted his dad at an American airport on the way home from a holiday, he got no support from his siblings, who he doesn’t name in the book.

Davies looks back on himself as a motherless boy desperate for comfort and is angry that instead he got the opposite from his dad, who drew him into a sinister power relationship by telling his son what happened between them was a secret.

That Davies has gone on to have a successful comedy career and, perhaps more importantly, has a happy marriage and three children of his own, is remarkable. He is horrified at the thought that any of his children should ever suffer what happened to him.

This isn’t an easy read, sad and horrifying as it is. And yet, the fact that Davies has survived to tell the tale and is now part of a happy family must surely bring hope to anyone who has suffered similar experiences.

‘Just Ignore Him’ by Alan Davies is published by Hodder & Stoughton, £18.99 hardback

A Q&A with Arya